A style of music native to Japan with a sizeable following is Visual Kei (“visual” of course is an English word and “kei” means “style” in Japanese). This type of music is known for its performers’ visual style as much as their music, as they’re dressed in incredibly ornate fashion.

Visual Kei may owe some of its roots to flamboyantly colored and stylized ancient performance styles from Japan, such as kabuki and noh. They may also owe some of their style to glam rock singers, such as Ziggy Stardust (David Bowie). However, their look is largely unique and not quite exactly like any of these influences.

Visual Kei bands typically—but not always—wear clothes inspired by overly colorful or Gothic black-and-white Victorian-era European attire, with lots of ruffles and large, baggy sleeves. Feathers, ribbons and lace are common accessories. The band members’ hair is typically dyed bright colors and is styled in long, wavy or spiky style, but may also be elegantly tied back. The band members may also wear color contacts, since most Japanese people have dark brown eyes and they want to appear a little more European. (However, the contacts may also be a color not found in human eyes.)

The band members’ faces and exposed skin are also typically painted pure white, which is a direct connection to the kabuki and noh style of theatrics. (Pale, white skin is traditionally seen as a sign of beauty in Japan and may represent delicateness.) Perhaps more closely tied to the theatrical traditions of kabuki and noh is the fact that many Visual Kei bands feature at least one band member who dresses explicitly as a woman—despite being a man. All of the band members tend to embrace a sense of androgyny, but some more so than others.

The type of music you might hear from a Visual Kei band might be described as some sort of punk, classical music or operatic music and glam rock mix, with hints of metal. Songs can be both hard-core and upbeat or slow and ballad-like.

Visual Kei debuted in the late 1980s and was quite popular during the 1990s, but the popularity died down somewhat toward the end of the decade. It’s had a sort of revival since 2007, but it’s more popular these days with a core audience than a widespread one.

Here’s a taste of some Visual Kei:

~Malice Mizer, one of the most popular bands from the ‘90s (now disbanded)~ 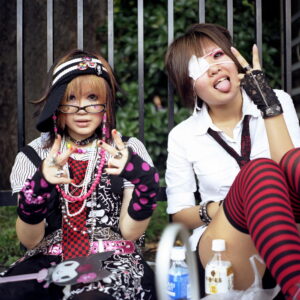