Japanese activities run the gamut from the traditional theater with a 600-year history to sporting events from 500 years ago that are followed with equal national enthusiasm in the modern day to meeting at the Hachiko statue at Tokyo’s Shibuya Station for a day of shopping, arcades, and a visit to an amusement park.

The visitor to Japan can choose to immerse him or herself in traditional Japanese cultural activities or ultramodern technologically-advanced pursuits—or both!

Kabuki is the most recognized form of Japanese Theater. There are, however, also Noh Theater and a puppet-driven one called Bunraku. Click on this section to learn more about this artsy side of Japan!

Legend says that the Japanese people won their homeland when their leader, the god Takemikazuchi, won an epic sumo wrestling match more than 3500 years ago. Sumo has a long history in Japan and is still treated with reverence today. Learn more about sumo wrestling, a traditional Japanese activity that continues to excite a nation.

Gathered around in groups on a picnic blanket, friends, colleagues, and families enjoy sake and food while gazing upon the unparalleled beauty of trees full of cherry blossoms. Learn more about the quintessentially Japanese phenomenon of the Hanami cherry blossom party.

The Japanese may be known for their strong work ethic and busy on-the-go lifestyles, but they sure know how to relax! Onsen, or hot springs, are one example of a traditional way to unwind.

Reading comic books, or manga, as they are called in Japan, is a far more popular activity in Japan than it is in the West. With the best-selling manga selling 2.8 million copies per week, you’re unlikely to travel throughout Japan without seeing a few people reading manga at stores, on trains, or on their cell phones.

Ikebana is the Japanese art of flower arranging in which no actual flowers may be used. These minimalist arrangements of items found in nature stress simplicity, as does the process of arrangement itself. Associated with refinement, patience, and understanding, those who can successfully complete an ikebana arrangement are thought to be cultured and graceful. 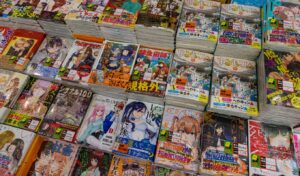