What if each morning instead of that bowl of cereal or that plate of bacon, toast, and eggs, you started your day off with a salad, some fish, a mountain of rice, and a bowl of soup made with things like fermented soybeans, dried kelp, soy sauce, dried baby sardines, shiitake mushrooms, and dried tuna shavings—to name a few ingredients? While the idea of such a soup for breakfast may turn a few Western stomachs, miso soup is an essential cornerstone of the Japanese dining table—for breakfast, lunch, and dinner alike!

Although miso soup may be the most common miso dish, miso is actually a dry Japanese seasoning that’s used in all kinds of Japanese cooking. To produce miso in its basic powdered form, grounded rice, soybeans, and/or barley—although other forms of miso include the stock ingredients of buckwheat, millet, rye, wheat, hemp seed, corn, chick peas, and azuki beans—is added to salt and koujikin, a kind of edible fungus, and fermented for five days to three years! This powdered form is often added to soy sauce (fermented soybean paste) to produce a gelatinous miso paste that’s used in Japanese sauces and the aforementioned miso soup.

The earliest form of miso—first made in China around the 4th or 3rd century BCE—was introduced to Japan by Chinese Buddhist monks in the 6th century CE. These initial Japanese forms of miso, then called hishio or kuki, were made with non-grounded fermented soybeans. It wasn’t until the Muromachi era in the 14th century BCE that miso was first ground into paste by Buddhist monks.

Miso quickly became a staple of the Japanese diet, feeding the samurai, the peasant, the aristocrat, and the monk alike. Initially served alongside rice, fish, and vegetables, miso eventually became an ingredient in many Japanese dishes and continues to nourish the Japanese to this day.

Miso shiru (miso soup) is one of the most common dishes that features miso as its main ingredient. The stock of this soup is the dashi stock, which is made of dried kombu kelp, niboshi (dried small sardines), and/or shiitake (a kind of mushrooms) along with kezurikatsuo (dried, fermented, and smoked tuna shavings). This dashi stock is mixed with miso paste, most often of three varieties: shiromiso (white miso), akamiso (red miso), and kuromiso (black miso)—which are progressively saltier and heartier the darker they are.

The other ingredients in the miso soup are left up to the cook, but often consist of any combination of negi (a type of onion), tofu, potatoes, seaweed, fish, daikon (a type of radish), onions, shrimp, mushrooms, corn, pork, beef, chicken, ginger, and carrots. The balance of the ingredients may be chosen for their contrast not only in taste and texture, but even in color—and may be indicative of the season in which the soup is served.

Miso also appears in marinades and sprinkled over grilled dishes, such as grilled meats, tofu, mochi (a rice cake), and vegetables. You’re unlikely to find grilled corn on the cob in Japan without shiromiso sprinkled on it!

The Japanese have one of the highest life expectancies in the world, and a healthy diet of foods like miso may be one reason why! Miso is rich in Vitamin B12, iron, and protein and contains a beneficial bacterium called Lactobacillus acidophilus that can improve intestinal health over time. Miso soup, like chicken soup in the west, is used to soothe sick people’s throats, clear up their clogged sinuses, and boost their immune systems—but it may be even more effective than our chicken soup! Miso soup has even been given to people who have suffered radiation sickness in both Japan and Russia after nuclear attacks and disasters. Recent studies suggest that women who eat miso soup regularly reduce their risk of developing breast cancer. 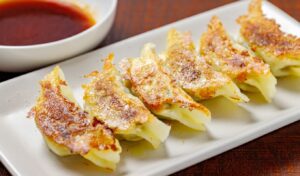