In the heart of one of the cultural centers of Japan, you gaze across a large pond at an endless array of verdant green Japanese maple trees. Jutting out into the water are graceful peninsulas and islets with shapely bonsai trees. But at the center of it all, gleaming so brightly in the sun that it almost hurts your eyes, is the Golden Pavilion Temple.

Kyoto’s “Golden Pavilion Temple,” the Kinkaku-ji (official site), is formally called the Rokuon-ji (“Deer Garden Temple”), but its nickname is much more widely known. This three-story Buddhist temple sits along the edge of a large pond called the Kyouko-chi (“Mirror Pond”), which strikingly reflects the temple’s splendor in the sunlight.

Surrounded by a lush forest and a kaiyuu-shiki, a “strolling garden,” the Kinkanu-ji is a popular stop for natives and tourists alike.

First built in 1397, the Kinkaku-ji was originally designed for a shogun (military leader) as a retirement villa. The shogun’s son inherited the estate and allowed the Rinzai school of Japanese Zen Buddhists to turn the villa into a Buddhist temple.

The Kinkaku-ji has been burned down three times—twice during a 10-year war in the 15th century and once as recently as 1950 when a mentally ill monk tried to commit suicide and set fire to the pavilion. The foundation of the Kinkaku-ji as it appears today was completed in 1955, although improvements to the roof and gildings have been made over the past half century.

The Kinkaku-ji is literally covered in pure gold leaf, inside and out! Although the original shogun owner did envision his retirement villa covered entirely in gold, he only managed to cover the top floor’s ceiling in gold leaf while he was alive.

Subsequent rebuilding and improvements added more and more gold until the 1980s. Eventually, gold leaf that is five times as thick as the original gold plating was added to the building’s exterior. The gold is so valuable that the temple has its own set of guards who watch over it night and day.

The three floors of the Kinkaku-ji were all designed in a different style. The first floor is called the Housuiin (“Temple of Dharma Water”) and is the one floor without gold leaf. It was built in the style of Heian era imperial aristocracy, which is called shinden-zukuri style architecture.

At the very apex of the roof is a statue of a Chinese-style phoenix made entirely from gold.

Unfortunately for those in awe of the Kinkaku-ji’s splendor, the inside of the temple is off-limits to visitors. However, visitors are welcome to stroll through the gardens and the compound, view the temple from the outside, write down wishes and prayers, and have tea at an adjoining teahouse. 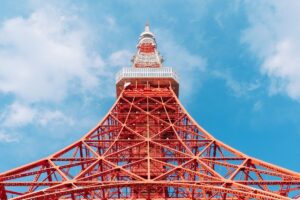