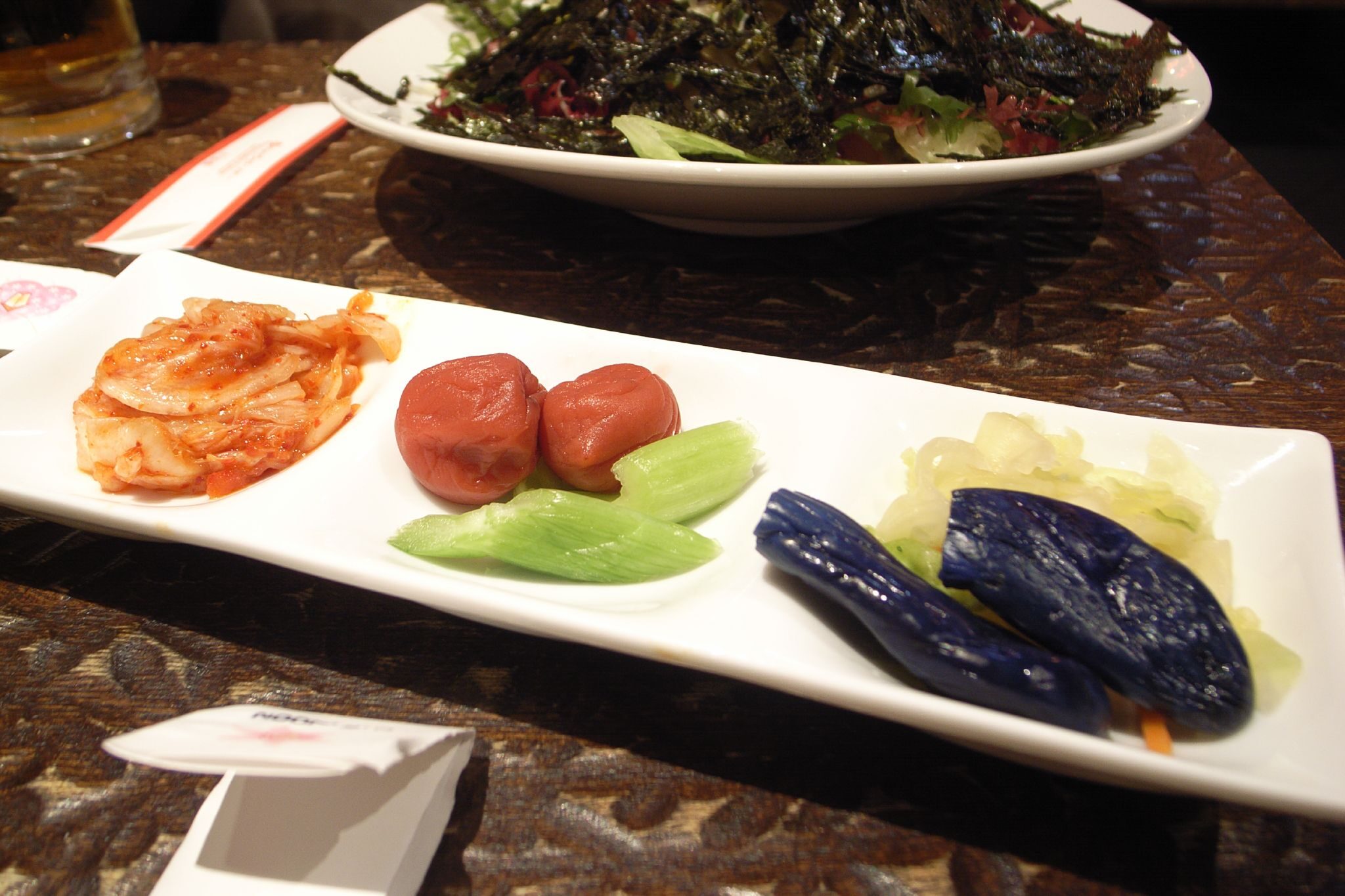 When discussing Japanese food in the past, we’ve mentioned foods like umeboshi (pickled “plums,” as they’re often called, although the fruit is actually closer to an apricot). Pickled foods are seen frequently in Japanese cuisine. The word for pickled foods is tsukemono.

When you order a Japanese meal set, you’ll often be served a small plate of Japanese pickles. These will not taste or look like the Western pickles to which you are accustomed, as they are usually not pickled in distilled vinegar. They’re softer and smaller than the typical Western pickle and are sometimes made by soaking in a mixture that may include sake, miso, soy sauce, rice bran, mustard, sugar, spices and occasionally, vinegar. However, much of the time, they’re simply placed in a special pressurized container called a tsukemonoki along with some salt. The tsukemonoki uses tsukemonoishi (weight stones) to press upon the vegetables or fruit. The process takes at least ten hours. Juices come out of the produce and the tsukemono pickles in its own juices.

Besides the basic pickled cucumbers to which we in the West are accustomed, the most popular tsukemono include umeboshi, takuan (pickled daikon radishes), beni shoga (ginger pickled with the brine from umeboshi), shibazuke (pickled eggplants), oshinko (pickled Chinese cabbage), and acaharazuke (pickled turnips). You may even find certain types of fish pickled (this is usually called kasuzuke, but you can find kasuzuke made with just vegetables as well, as it refers to the method of pickling in sake lees [yeast]).

Tsukemono can be served as a side dish or they can be thrown together as a salad or within a meal. They also make popular items in rice and onigiri to give the plain rice a touch of flavor. They’re easy to buy in Japanese grocery stores, but they’re also simple enough to make in homes if you have a tsukemonoki. If you don’t have a tsukemonoki, you can try to make your own in a tight container as well by applying pressure to the vegetables.

Have you ever eaten tsukemono? Do you like tsukemono more or less than Western pickles? Would you like to try making tsukemono yourself?