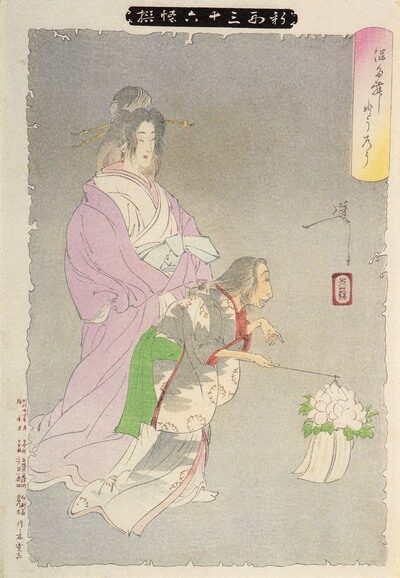 Summer is the season of Obon in Japan, so it’s high time for another look at a traditional Japanese ghost story. This time we’ll take a look at Botan Dourou and the two most common versions of the tale.  Also known as “The Peony Lantern,” Botan Dourou dates back to the 17th century in Japan, although it may have been derived from an older Chinese tale. There are two versions of the story with some major differences: the earlier Otogi Boko version and the Meiji-era theatrical version (also known as the Rakugo or Kabuki version). Both versions feature a gorgeous woman ghost named Otsuyu, who wanders past a man’s house each night carrying a peony paper lantern. She is also accompanied by a young woman ghost. (The woman is her maidservant.)

In the earlier version, an older man, a widower samurai named Ogiwara Shinnojo, is the man who spies Otsuyu each night. Struck by her beauty, he falls in love with her. He does not know at first that she is a ghost. Every time the sun sets, she visits with him, but she leaves before the sun rises with no explanation. When a snooping neighbor spies the woman visiting Ogiwara each night and thinks that there’s something odd about her, he peers into Ogiwara’s bedroom one evening and finds Ogiwara making love to a skeleton. The neighbor tells a Buddhist monk, who warns Ogiwara to stay away from the woman or he will die as well. The monk places spiritual protective barriers around Ogiwara’s home. When Otsuyu returns that evening, she cannot enter the home. She calls forlornly for Ogiwara to come out and join her. Despite the warnings, Ogiwara is too much in love with her to resist. He exits his safe home and follows Otsuyu back to her “home”: a grave. In the morning, Ogiwara is found dead in the open grave. He’s embracing a skeleton.

In the later version, Ogiwara is replaced with a young man named Saburo, a medical student rather than a samurai. Otsuyu’s story is fleshed out–and it turns out that she and Saburo were in love when she was alive. Otsuyu, daughter of a wealthy widower samurai, was sent in life to live in a small home with a single maidservant after the samurai remarried and his new wife did not like Otsuyu. When a doctor visits Otsuyu to check in on her, he takes along his student, Saburo. Saburo and Otsuyu are instantly smitten with one another. Otsuyu begs Saburo to visit her often–and tells him she will die if he goes too long without seeing her–and he promises he will visit her. However, social decorum of the time mandated that he not visit an unwed woman alone, so Saburo relied on tagging along with another of the doctor’s visits. However, the doctor refused to go back, knowing that Saburo had fallen for Otsuyu and disapproving of the match. (In some versions, Saburo falls ill for a long time and becomes bedridden for months. He cannot get a message to his love.)

Otsuyu dies of a broken heart and her maidservant dies in grief at the loss of her mistress. The pair become ghosts who stroll past Saburo’s home at night carrying a peony paper lantern. Saburo does not know his lover has died, so he’s overjoyed by her nightly visits. In this version, another servant of the house spies Saburo in bed with a skeleton. He tells a Buddhist monk, who gives Saburo the news that his love has died and shows him her grave as proof. Grief-stricken, Saburo retreats to his house and the Buddhist monk places protective barriers up to block out the spirits.

Otsuyu and her maidservant continue to visit Saburo at night but cannot enter the home. Hearing Otsuyu sadly call for him makes Saburo more heartbroken and over many nights, he loses his will to live. Other servants pity the sad, dying man and one night remove the protective barriers without Saburo’s knowledge. That night, Otsuyu once again enters the home and makes love to Saburo. He is found dead in the morning with her skeleton in his arms, but he is smiling and content.

Have you ever heard of Botan Darou? Have you seen a movie or stage version? Which version do you prefer, the earlier or the later version?