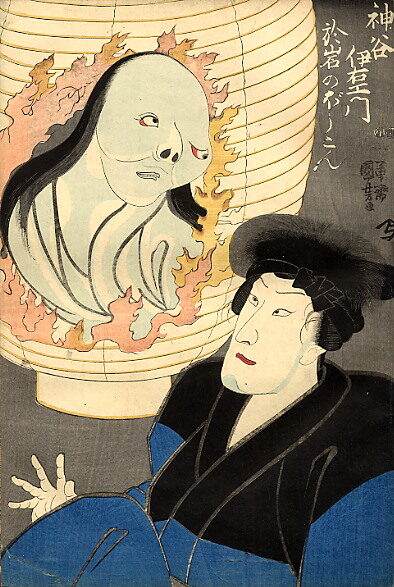 Bloody Mary, The Legend of Sleepy Hollow… How many ghost stories from Western culture can you name? In Japan, where cultural beliefs born from the Shinto religion dictate that everyone and every thing–even inanimate objects–have spirits, there are quite a few common-knowledge ghost stories. This week we’ll review one of the most famous Japanese ghost stories.

Yotsuya Kaidan: Originally a kabuki play from the early 19th century, Yotsuya Kaidan features a ghost woman named Oiwa out for revenge. The tale goes that an impoverished master-less samurai named Tamiya Iemon falls in love with a lovely woman named Oiwa. Oiwa’s father thinks Iemon is not good enough for his daughter, and in a fit of rage, Iemon kills Oiwa’s father with his sword, unbeknownst to Oiwa. He consoles Oiwa and promises to help her find her father’s killer. They marry and Oiwa becomes pregnant, but Iemon soon becomes bored with his lovely bride.

Iemon falls in love with another woman–a wealthy woman named Oume–and eventually woos her. When told by Oume’s grandfather that if he weren’t married, he could have Oume and all of her wealth and prospects, Iemon decides to kill his pregnant wife by poisoning her food. (In some versions, Oume is less attractive than Oiwa and it is she who orders Oiwa’s food poisoned so Oiwa will become deformed and Oume will have an easier time wooing Iemon.)

Iemon continues to poison Oiwa’s food and watches coldly as she suffers, becomes disfigured and nearly dies. Thinking she’s dead, Iemon leaves to tell Oume, but Oiwa is only unconscious, although she suffers a miscarriage. (In some versions, she’s already given birth and the baby is fine.) Iemon pretends to be happy that she survives, only to push her off a cliff when he takes her on a walk shortly thereafter.

The night before Iemon’s inevitable wedding to Oume, he’s haunted by the disfigured ghost of Oiwa. He sees her face in the dim light of his lantern and he thinks he hears the word “Betrayal!” but he brushes it off. During his wedding to Oume the next day, he lifts up his new bride’s veil only to see the disfigured face of Oiwa, who shrieks “Betrayal!” at him. Scared out of his mind, Iemon unsheathes his samurai sword and beheads the apparition… Only to see the head of his bride Oume roll to the floor.

Hearing ghostly laughter, Iemon runs from the wedding and hides in the disheveled shack he shared with Oiwa. He hears a knocking at the door and sees Oiwa when he answers, so he beheads the ghost–only to discover that it was Oume’s grandfather whom he killed.

Driven mad, Iemon runs to the cliff where he shoved Oiwa off the ledge. Hearing laughter, he almost jumps but stops. Witnesses recount that despite the samurai having a change of heart, they saw a ghastly woman push the man off the cliff before vanishing into thin air.

In the future we may review more Japanese ghost stories. Do you want to learn about more ghost stories? Have you heard a different variation of the legend of Oiwa and Iemon?