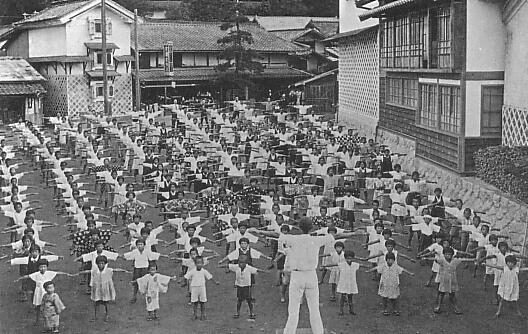 Every morning at 6:30, the NHK radio airwaves play a special tune and encourages residents of Japan everywhere to join together for a special 5-10-minute workout. Communities gather at local parks, employees at offices arrive early to exercise before the work day begins, and kids who get to school early for sports team practice join together to workout. In the summer, schools, parents, and communities encourage young children to head to the local park and participate in the morning exercise. In many areas, a volunteer instructor will stamp a participation card for each morning a kid comes to the session in the summer; if the kids fill up their cards, they get participation prizes.

These morning exercises are called “radio taisou,” or “radio calisthenics.” There’s also an afternoon version that airs at 3:00. Some companies have their workers drop what they’re doing to stand and perform the exercises. There are two kinds of exercises: those for younger, more energetic people and those for everyone else. The basic exercises is mostly a series of stretching routines, a simple “warm up” to get the blood flowing and the mind more alert for the day. At most sites, a volunteer will lead the group in the workout. After many days of repeating the stretches, you may come to remember how to do them yourself.

Radio taisou began in Japan in the 1920s. The Japan Post newspaper and NHK Radio started the project, although they may have been inspired by MetLife’s American radio exercise programs that appeared around the same time. The radio taisou briefly stopped after World War II, when American occupiers thought the masses getting together for a daily workout was too militaristic in nature. However, the program was reworked in the 1950s and focused more on exercise and bonding with co-workers, classmates, and members of the community. They’ve aired consistently since.

See an example of the radio taisou in a park here.

Have you ever participated in radio taisou while in Japan? Do you like the idea of a short daily exercise you do together at work, school, or in the neighborhood? Why or why not?