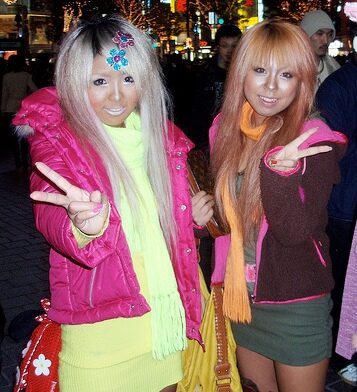 Japanese “gals” — tough girls — may not be afraid to swear!

As we’ve discussed in previous entries, politeness and courtesy is extremely important in Japanese culture. Just not speaking to someone with the correct conjugation of verbs could prove a bit disrespectful, depending on the context. However, to swear to someone is even more disrespectful. Cursing at Japanese speakers is not recommended. Nonetheless, your curiosity may prompt you to seek out swear words in the Japanese language. You’re also likely to hear these words in Japanese movies or TV shows, depending on the content. Or you could overhear a Japanese speaker swearing and be wondering what they’re saying!

There’s a number of polite to casual ways of addressing someone as “you.” Read more here. Extremely impolite ways–as insulting as if you were swearing them–to say “you” include:

Teme = Often translated as “you b*tch or bastard”; a high-level insult, but not the most extreme.

Kisama = The highest level of insult, as bad as calling someone a “mother f***er”; strangely, the literal translation is “your honorable self”, but the intent is meant sarcastically.

The following words can be used to address or refer to people:

Baka = “Idiot/dummy”; the least insulting insult that you may hear even children call one another. However, in some areas of Japan, “baka” is a level more insulting than “aho.”

Bakayarou = One degree more insulting than “baka” alone, but the meaning is the same. Perhaps “moron” is a better translation.

Kusoyarou = A high-level “moron” insult; literally refers to feces and a hole…

Swear words to say aloud in a frustrating situation (in which you don’t mind being rude) include:

Fakku! = The Japanese pronunciation of “F**k!”

You’ll find quite a few more vulgar insults as well, but this serves as a good introductory course!