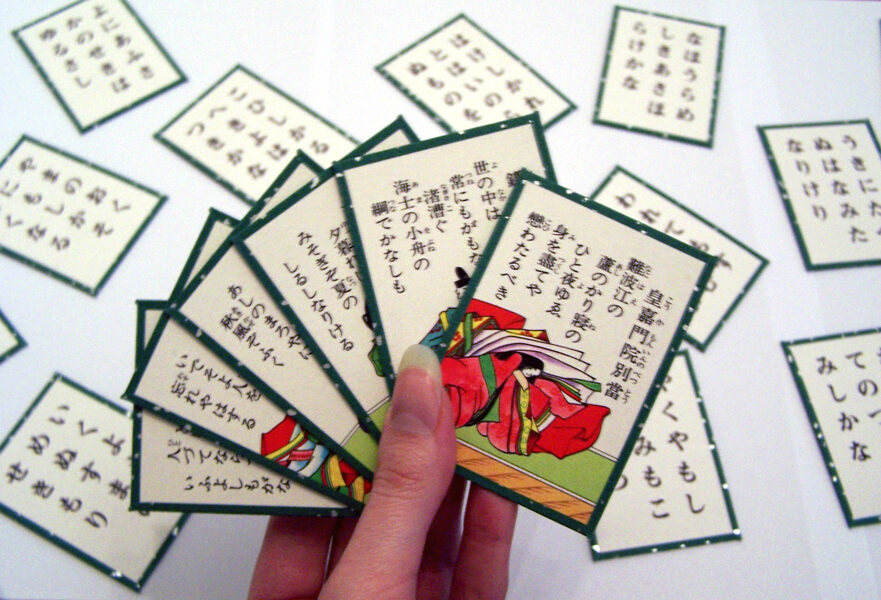 Our coverage of the the Japanese New Year celebration continues. This week we’re going to talk about traditional New Year’s games that children (and sometimes adults) play with each other during the holiday. The tradition of playing these games on New Year’s is quite old. While fewer children are interested in traditional games in the modern era, you’ll still find many participating in the custom of playing these games during the New Year holiday.

Fukuwarai (“lucky laugh”): This game is somewhat like Pin the Tail on the Donkey, although a human face is used. Blindfolded, children must take the shapes for eyes, ears, mouth, nose (and sometimes eyebrows, mustache, etc.) and try to properly place them on an outline of a face. Unlike Pin the Tail on the Donkey, this is traditionally performed sitting down with the face on a table and every participant gets his or her own face to make. Once finished, all of the participants remove their blindfolds and laugh at all of the faces, sometimes (in good humor) saying who in the family each face resembles.

Hanetsuki (“shuttle passing”): This game is often called Japanese badminton. It’s similar to badminton except that there is no net and the two players simply try to pass the shuttle (called hane) back and forth. The hane also looks different from a Western shuttle and is usually a very small round ball with feathers attached. The paddles, called hagoita, are ornately decorated in traditional Japanese style. Some people even collect these paddles without using them.

Sugoroku (“two sixes”): A board game that’s existed for over a thousand years, sugoroku is another traditional New Year’s game to play. A bit similar to backgammon, you roll a die and advance across the board. There’s a simpler version that’s popular with children that’s closer to Snakes & Ladders.

Karuta (“cards”): Playing a traditional Japanese card game is another common activity around New Year’s. However, karuta is not like the card games you tend to think of. Instead, cards are arranged face up on a surface. Each card has something on it–a vocabulary word, lines of a poem, pictures–and the goal of the game is to find the right card and grab it before the other people playing do. Someone directing the game will call out whatever he or she wants you to choose (reading the first few lines of a poem and asking you to complete the poem, saying a vocabulary word in one language and asking you to find it in another, etc.) and it’s up to the other players to find the right card. This is a great game for learning vocabulary words.