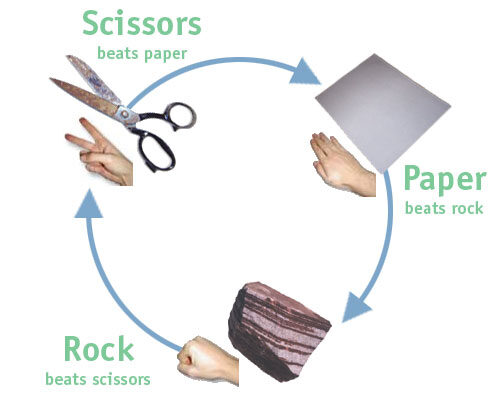 Since what we know in the West as “Rock, Paper, Scissors” (or “Stone, Paper, Scissors”) was developed in China, it shouldn’t be a surprise to discover that the game exists in many countries around the world. The sheer amount you see the game played in Japan, though, particularly on Japanese TV shows, may surprise you. It helps if you’re familiar with the Japanese take on the game in case you’re ever asked to play. You will see the game played to determine who wins something, like a flip of a coin, or just to pass the time.

In Japan, the game is called “jankenpon” or “janken” for short. The game is usually played for the best of three. The rules are similar to “Rock, Paper, Scissors” in that you make the same fist for “rock,” peace sign for “scissors,” and flat palm for “paper.” Paper still beats rock, rock still beats scissors, and scissors still beats paper. The players begin the game by shaking their fists up and down in tandem three times, revealing their choice of rock, paper, or scissors on the third beat. In Japan, you say “jan” on the first beat, “ken” on the second beat, and “pon” on the third beat.

If the players both throw the same choice and the round is a tie, they say, “Aikou deshou” in three beats (“ai-kou-deshou“) and play again, shaking their fists up and down on each beat and throwing their new choices on the third beat. This means “one more time!” However, you can keep saying it and keep playing again and again no matter how many times you tie thereafter.

Some, but not all, games of “jankenpon” are more complex, particularly when played on Japanese game shows. During this version of the game, the players are seated at a table. On the table is one toy hammer (a plastic collapsible squeaky hammer) and one hardhat. The two players play a round of “jankenpon” but the person who throws the winning choice of rock, paper, or scissors doesn’t necessarily win. Instead, the loser must scramble to grab the hardhat and put it on his head. The winner must grab the toy hammer at the same time. The winner is trying to hit the loser on the head with the toy hammer before he successfully puts on the hardhat. If she does hit him, she wins the round. If the loser puts the hardhat on before the hammer hits the top of his head, no one scores the point and the players go back to playing jankenpon.

Have you ever seen Japanese people play jankenpon, with or without the hammer addition? Would you rather play jankenpon or flip a coin to settle a debate?