Hiragana is one of two scripts exclusive to the Japanese language and is the more frequently used of the two. Japanese kanji, the common pictographic Japanese script in which many characters have more than one meaning and pronunciation, was imported from the Chinese language. Unlike kanji, the kana alphabets (hiragana and the other Japanese-exclusive script, katakana) consist of a total of 46 basic characters that each represent a basic Japanese syllable. With hiragana, some of these characters can be modified and/or combined so that the actual total of syllables in the script is 104.

What’s the difference between hiragana and kanji? Let’s look at a few examples:

The hiragana forms of the words tell the reader how to pronounce the word, but the characters themselves have no other meaning. (Just as the letters in our Roman alphabet have no meaning and are used in different combinations to form a word.) The kanji characters literally mean the word they represent. The most basic kanji characters are intended to look like the word they represent! (Doesn’t 川 look a little like a river?) Kanji characters provide a reader no clue how to pronounce the word, unless you already know some kanji patterns.

Because a Japanese person needs to know nearly 2000 kanji just to comprehend daily reading material like a newspaper (and there are around 6000 kanji total), it can be difficult for children and even some adults to read complex texts. Therefore, hiragana and katakana sometimes appear as furigana, a smaller script that appears next to kanji to help children (and the Japanese language student!) read the word.

Let’s start with the 46 basic hiragana characters. Once you learn to read these characters, learning the rest of the syllables will be easy! 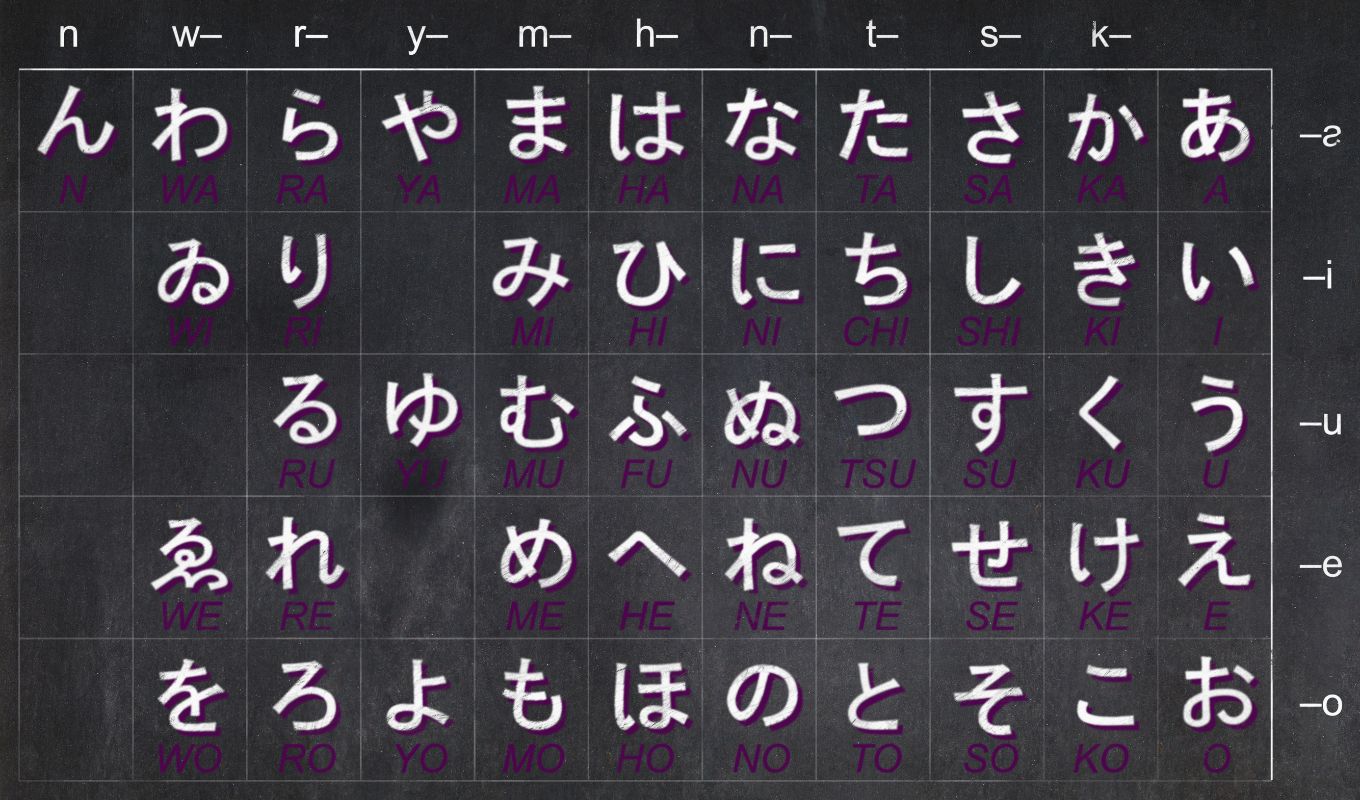 Most of the 46 basic hiragana characters are pretty straightforward! There are only a few that don’t follow the basic “a/i/u/e/o” pattern. In natural Japanese, there is no “ti,” “tu,” or “hu” sounds; these are replaced with “chi,” “tsu,” and “fu” respectively. (Although the “fu” ふ sound can sometime be pronounced very closely to “hu.”) There are no “yi,” “ye,” “wi,” “wu,” or “we” sounds in natural Japanese, either, but you don’t have to memorize anything to replace them! “N” ん is the only sound in the Japanese language that ends on a consonant!

There are a few important exceptions to remember when it comes to pronouncing hiragana. “Wo” をis almost exclusively used as a particle and is often pronounced “o.” When the “ha” は and “he” へ characters are used as particles, they’re pronounced “wa” は and “e” へ respectively. An easy way to remember this is that “hello,” “konnichiwa,” is written こんにちは.

Sometimes you’ll be reading hiragana and you’ll see “tsu” つ, only it’ll be a lot smaller than the rest of the characters: っ. For example, きっと (“surely”) and いっせい (“lifetime”). Does this mean these words are pronounced “kitsuto” and “itsusei”? No! That would be きつと and いつせい. (Both of which are nonsense words.) Be careful of the small “tsu” っ! The small “tsu” っ indicates that the consonant that precedes it should be lengthened when you pronounce the word. The way to romanize the small “tsu” っ, then, is to write two of the consonant that’s lengthened. きっと and いっせい are pronounced “kitto” and “issei,” respectively. Luckily for beginner learners, “tsu” っ is the only hiragana character that acts like this.

Although you may have to spend time memorizing which of the basic hiragana characters to which you must add dakuten to make new sounds, it’s simple to remember that the handakuten is used only to make “p” sounds (by adding it to the “h” sounds).

As stated above, hiragana characters are traditionally used for native Japanese words for which there are no kanji and for particles within a sentence. For example:

In this example, “wa” is the particle that indicates the subject (“watashi” or “I”) of the sentence. Remember that when used as a particle, the character that looks like “ha” はis actually pronounced “wa.”

What is トーニー then? Because the name “Tony” is a foreign name (as far as the Japanese language is concerned), it must be written in the Japanese script for foreign words, katakana. You can learn more about katakana in the next kana lesson.

Thorough knowledge of hiragana is essential to being able to read Japanese. Even if you never learn as many kanji as a native Japanese, you’ll be surprised how far you can get in reading Japanese with a comprehensive knowledge of hiragana. This especially true if you can get your hands on reading material for children and young adults, which should have furigana written to the side of or above most kanji to help you learn how to pronounce the kanji character.

Unfortunately, the only way to learn hiragana is through rote memorization. This website offers flashcards and quizzes to help you through this necessary process. The good news is that there are nowhere near as many hiragana syllables as there are kanji characters!

Grammar: How To Use The “Ni” Particle In Japanese