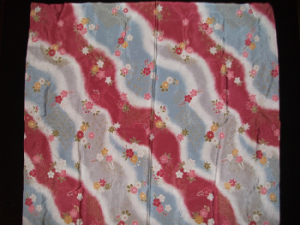 A few weeks ago, we discussed the bento lunch in Japan and briefly mentioned the wrappings via which a bento box is usually carried: the furoshiki. This very large handkerchief-like cloth is reusable and thus makes an environmentally-friendly way to transport food. (The bento box itself traditionally has no handles and is not simple to carry.) It can also double as a food mat to spread out on your desk, lap or even on the grass once you unwrap your bento box, catching spills and making clean up much easier.

The furoshiki dates back to the 8th century CE, when it was originally called the hirazutsumi (“flat, folded bundle”). It became colloquially known as the furoshiki (“bath spread”) during the Edo Period (17th to 19th century CE) when it became a common practice to use the cloth to bring clothes to and from the public baths.

The furoshiki is actually used for far more than just wrapping lunch to-go. The original intent of the furoshiki was something like a modern grocery bag or tote bag, allowing the user to transport food, shopping goods, and other items. It could also be used to protect boxes and items from dust during storage. The furoshiki was even used like wrapping paper for gifts. (Traditionally, the giver receives the wrappings back.) These uses are still prevalent today, particularly for those who wish to reduce their waste contribution.  You’re even likely to see some Japanese businesspeople and government workers carrying documents in furoshiki instead of briefcases.

Furoshiki come in multiple sizes and can be almost as large as a beach towel, only in a square shape. What we think of as a handkerchief in the West is usually not large enough to be considered a furoshiki because you need plenty of cloth with which to craft handles out of the fabric when you tie it around the item. However, if a handkerchief is all you have on hand, you can try wrapping something small. Otherwise, scour Japanese supermarkets and housewares stores for your own furoshiki, both locally and online. The ones made out of material like rayon are relatively inexpensive.

There are many ways to wrap items using a furoshiki, but we’re going to look at three of the most common ways in closer detail:

The most basic of ways to wrap a furoshiki is the otsukai-tsutsumi, which is usually the method used for wrapping square or rectangular bento boxes.

Sometimes translated as “the briefcase” because it acts in a similar fashion, the hon-tsutsumi allows you to carry rectangular documents as well as books. You’ll need at least two piles of documents or two books of roughly the same height and width to make this wrap work.

Another popular use of the furoshiki is the bin-tsutsumi, which is used to wrap a single bottle either recently purchased or to be given as a gift. (There’s actually another method for wrapping two bottles at once.) Bottles intended for this wrap are traditionally tall and slender, such as wine and sake bottles.

This post is an entry for Japan Blog Matsuri. Read about more Japanese how-tos at the Nihon Group website!