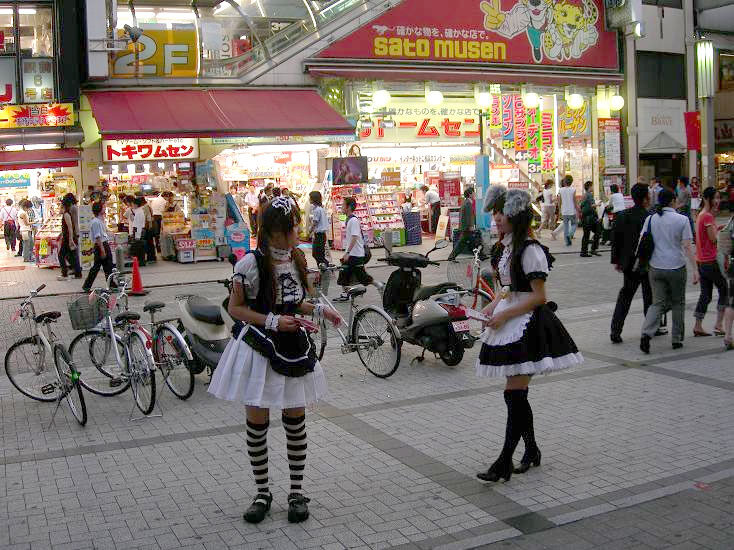 This week we’re taking a look at another famous part of Tokyo: Akihabara, the best place to find the latest electronics and computers. Not only will you find electronics, but you’ll also find anime DVDs, video games, manga and anime merchandise. This makes Akihabara a favorite place for anime fans to meet up and buy goods. The kind of merchandise you’ll find there have earned the area the nickname “Denki Gai,” or “Electric Town.”

Although they exist throughout Japan, maid cafes and other themed cafes are a popular mainstay in Akihabara. These cafes are watered-down versions of host and hostess clubs and cater to people with specific interests. The classic maid cafe features women in short-skirted maid outfits, whereas a foreign butler cafe may be filled with men from outside of Japan who call every lady guest their “princess.”

Akihabara “Electronic Town” is the site of a 2008 massacre in which a murderer drove a truck into a crowd and then jumped out of the truck to stab people with a dagger, killing a total of seven people and wounding ten others. In a country in which violent crime is extremely low (and guns are prohibited), the incident shocked the nation. The murderer, Tomohiro Kato, was tried and sentenced to death for the crimes. The pedestrian crossing in which the murders took place was closed until January 2011, when it opened only on a trial basis until June.

Have you ever been to Akihabara? Would you be interested in seeing what you can find for sale there? Did you hear about the Akihabara Massacre in 2008?